Although different plumbing companies work with different contracts and plans, plumbers basically face one thing in common: the very common plumbing mistakes that occur in houses. Experienced plumbers usually have seen most of the things that commonly go wrong in the plumbing system in houses; however, they have noticed that some mistakes are more common than others. These mistakes are entirely avoidable given the house owners are fully educated about these mistakes. This is why in this post we are going to help you realize and avoid making these mistakes in your own house. 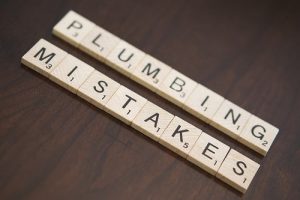 Dumping everything into the garbage disposal port

Remember that you should not overcrowd your garbage disposal port. These garbage disposal ports are customized to only take one thing at a time, so do not crowd it up by stuffing in all your garbage. If you do that and overcrowd it, the port would be narrowed and blocked. This would prevent you from disposing of further garbage inefficiently. And to unclog this, you might need professional help which might cause you a lot of money.

Throwing the wrong things into the garbage disposal

Flushing rubbish down your toilet bowl

Yes, your toilet bowls are designed to efficiently flush off large chunks of human waste, but that does not mean you can flush simply anything down your toilet bowl. Often we take their function for granted and we flush down random rubbish items like cotton balls, paper towels, hygiene products, and sanitary pads. This is a huge mistake because toilet bowls are customized to only flush off human waste products. If you flush off other objects, it is eventually going to lead to a nasty clog which is going to stink your bathroom up!

Letting hair get stuck in your shower drains

Most of our shower systems have a small multi-hole fixed drain tap that allows the water to run through. More often than not, human hair is the prime cause of this drain tap not functioning properly. When hair gets stuck in this drain tap, soap and other dirt particles get stuck onto the drain tap easily and cause debris to accumulate.

This can eventually lead to your drain tap not draining off your shower water. Moreover, if you do not pay attention to this clog and do not remove the debris in time, then you would need to stand in a puddle of water every time you shower. This clog can travel down to your drain and cause a massive blockage which would again cause you a lot of repair charges.

Placing too much weight on your shower poles

If you hang too many things on your shower heads or your shower handles, then you are inevitably going to damage the structures. It is best to avoid placing any weight on these fragile structures in total. Try getting other hooks or stands to be placed in your toilet for your convenience instead.

Pouring greasy items down your drains

A lot of people think this is a normal thing to do, but when you pour grease down your drain taps, they would lead to a clog over time. Grease has the property to solidify in the pipes with time and this can lead to massive and stubborn clogs which you do not want to deal with. Instead of pouring them down the drain, try to pour them into jars or waste bottles to dispose of them along with your garbage.

Using the wrong equipment to unclog

Remember that using a simple plunger is always the first option you should look at when you have a clog to settle. If the simple plunger does not work, then you can look into using something called an auger. But for a toilet clog, remember that you have to use a toilet auger, which is designed to unclog toilets. If you need professional help from a Scottsdale plumber, you can call us at Diamondback Plumbing.

More posts about Plumbing Repair
Why Water Softener Benefits Outweigh Its Cost
Posted January 30, 2023 How Long Does a Water Heater Last? Signs to Look Out For
Posted Why Does My Shower Drain Smell? Causes and Troubleshooting
Posted Low Pressure in Kitchen Faucet? Common Problems and Their Solutions
Posted 3 Types of Water Softeners and Their Pros and Cons
Posted December 21, 2022
Quick Contact