The plumbing industry is constantly growing with new ideas and ways to get the job done. Over the years many pipes have been used for plumbing (abs, PVC, copper, etc.) Now plastic or (PEX) piping can be used in almost all plumbing applications.

PEX plumbing pipe is increasingly growing in popularity as an alternative to copper pipes due to its higher flexibility, ease of installation, and cheaper cost.

PEX tubing is a cross-linked polyethylene pipe that is fairly new to the plumbing market. It is a single-layer pipe with a smooth inner surface and matte exterior and comes in red and blue colors for easier distinction between hot and cold water lines. (Also in black and white.) Often assumed to be weaker than a metal pipe, PEX will hold up just as long if not longer. 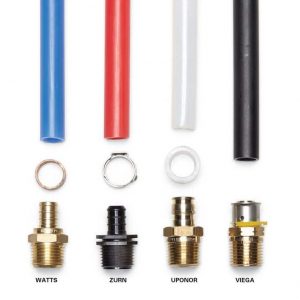 1/2″, 3/4″ and 1″ PEX pipes sizes are the most common for residential and small commercial installations

1/2″ PEX is the most common of all sizes and is typically used in conjunction with PEX plumbing manifolds to carry hot or cold water to plumbing fixtures. This site is also the most cost-effective and one of the most flexible tubing sizes.

3/4″ PEX is generally used for main water distribution lines in tiny to medium-sized residential homes. Usually, it carries the supply of water from the water heater to the PEX manifold. Due to its larger water-carrying capacity, 3/4″ PEX can also be used for plumbing fixtures that require high flow rates. These include shower jets, jacuzzi tubs, and similar.

3/8″ PEX pipe can be used for plumbing fixtures with normal or less than normal water flow requirements.

PEX does not get pinhole leaks as easily as copper can and there are usually fewer connections needed when installing PEX. Since it is also cheaper than copper, then the customer will save more money.

Diamondback Plumbing has been using PEX on many installations since it has come to the market. We have seen firsthand the quality of the tubing and have no problems installing it into any home or project.

More posts about Plumbing Repair
Why Water Softener Benefits Outweigh Its Cost
Posted January 30, 2023 How Long Does a Water Heater Last? Signs to Look Out For
Posted Why Does My Shower Drain Smell? Causes and Troubleshooting
Posted Low Pressure in Kitchen Faucet? Common Problems and Their Solutions
Posted 3 Types of Water Softeners and Their Pros and Cons
Posted December 21, 2022
Quick Contact